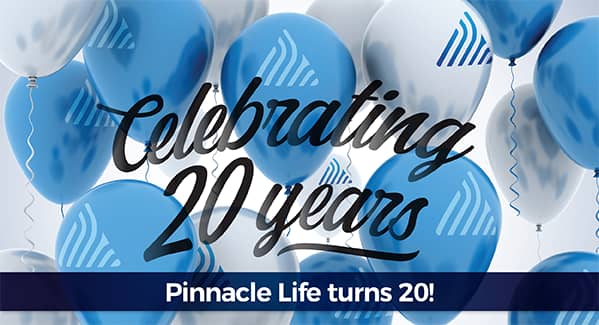 Who would have thought, 20 years ago, that Pluto would no longer be a planet? That we would watch TV on our phones (lucky they got rid of the cords right?) or that hover boards would be a real thing, not something just in the movies. Can you believe it? That’s what 20 years feels like. A heck of a lot can happen can’t it!

Over 20 years ago Noel Vaughan had an idea about making Life Insurance accessible to New Zealanders. At around the same time Larry Page and Sergey Brin had an idea about the mathematics behind linking web pages. Larry and Sergey’s idea became what we know today as Google, and Noel’s idea became Pinnacle Life. Each of them, in their own way, have impacted our world today.

Pinnacle Life started with a simple switch product. By 2000 a quote request could be submitted online. The future was set. Pinnacle Life would lead NZ in terms of direct insurance for the next 20 years.

By 2007 online underwriting leading directly to customers being covered in 10 minutes was available. In 2008 Funeral Cover was launched. Further product developments and online advancements would follow. Along the way multiple awards for both insurance industry leadership and technological development would be won.

In the last ten years further product enhancements have been added. Special Events benefits, Accidental Death, Income Protection and soon to be launched, a revamped Life and Critical Illness packaged product. We have also continued to push the boundaries digitally. We have launched online calculators and comparisons and most recently we have been the first to offer quoting via facial recognition.

If you’re not already a Pinnacle Life customer, get covered before 30 September and you’ll go in the draw for a $200 prezzy card, there’s 2 to be won!* (Or if you're an existing customer, we have a special draw for you which you will hear about directly from us).

The future is bright. What we can only imagine now, could be our reality in 2038.