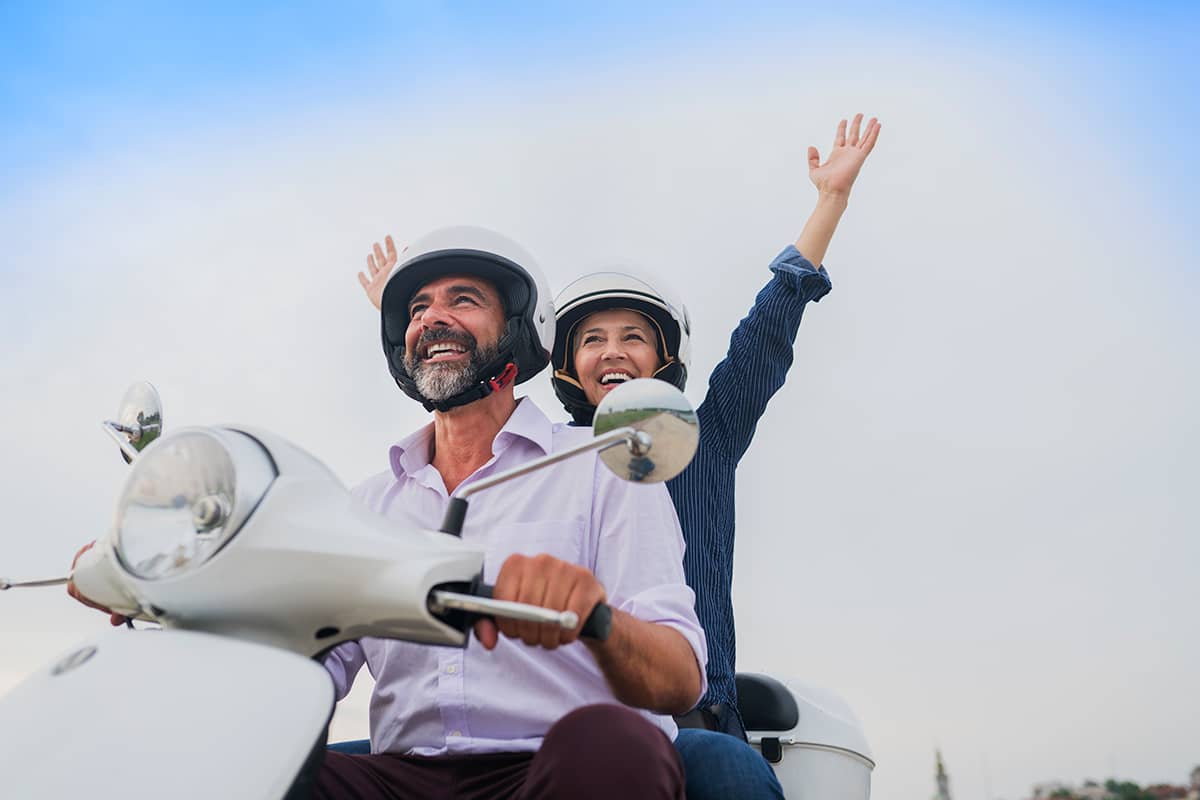 "I feel like I'm just starting; the whole world is ahead of me," says James Allan. "I've got a whole lot more journey to go, there's so much to do, let's go for it."

Nope, Allan is 55. One of Gen X, the cohort squeezed between the publicity-hogging youngsters and the moneyed/housed/secure baby-boomers. The artist and ad-man fully expects to live into his 90s (his parents are still healthy in their 80s), so figures he's not even two-thirds of the way through his life.

"My father at this age was thinking of retirement; my parents thought they were nearing the end of their lives," Allan says.

James and wife Rosetta married at 19 and 21 and had their two boys within a couple of years (most of their peers delayed marriage and babies until late 20s or even 30s) – but have not settled into anything like the sensible middle age of their parents.

They ran their own advertising and design agency together while bringing up the kids – but changed their lives too.

Rosetta, who didn't finish high school, began university study in her mid-30s, switching from advertising to her real love, a BA in creative writing earned paper by agonising paper over nearly a decade. She published her first book of poetry in 2007, an acclaimed novel Purgatory in 2014 and last year earned her Masters in the competitive creative writing school while she tutored and mentored other writers.

Next year, at 54, she finally gets to live as a full-time student when she takes up a writer's residency at the University of Waikato.

James also realised his lifelong dream of full-time art school when admitted to Elam at 46. The couple swapped their spreading cliff-top beach house for a tiny unit in the city, selling their art and finding admin work to fund their new lives.

The Allans have also been hands-on grandparents to their four grandkids aged 10 down to 4, providing social, financial and emotional support (and Instagram-worthy birthday cakes, on Rosetta's part) for their boys and their partners, again in a close way unthinkable to their parents' generation.

James loves that people mistake him for an older father, not a grandfather, when he's out with the kids, keeping up with their music and their social media world. Neither envisages ever stopping work.

That's a healthy way to create a better old age, says Associate Professor Debra Waters, deputy director of the Ageing Well National Science Challenge, one of 12 national research collaborations funded by the Ministry of Business, Innovation and Employment. It aims to find the best ways for older people to optimise brain and body health – and what sort of social and physical environments we'll need in the future.

"Number one is staying active, keeping up with old activities and building new experiences, particularly with other people" says Waters. "Social connectedness keeps us coming back, it's not just physical activity.

"We know that you can push your body as you get older. It's too easy to let physical activity drop as you get older," she says. "So the important thing in your 50s is to seek out what you enjoy, so you'll stick with it, stay engaged with it - and create wonderful new memories."

Waters says the spreading of families - having children later, those children delaying families - and the change of housing tenure (fewer people ever owning a house as they head into their 50s) will mean quite a different life for today's 50-year-olds as they age.

Angela Tringham, who has just turned 50, agrees: "I look at photos of my gran holding me as a baby and you'd think she was 90 - frumpy clothes, ancient-looking. I realised she would have been only 50 then," she says.

Angela, with husband Anthony (52), runs Curious Croppers, a gourmet heritage tomato farm. The pair dress young, have a mad, beloved social media presence and are the darlings of hot chefs around the country.

The trials and triumphs of their family (Max 17, Olivia 13) and pets and presence at cool food events are transmitted to huge audiences.

But there are some commonalities with their parents: "My mum was a lawyer but moved to the country - she had no idea what work that meant - and worked here on the farm until her late 50s," says Anthony. "We'll be working into our 70s so in that way we're similar to our parents, quite different from our grandparents. There'll be no retirement, we'll have a mortgage for the rest of our life."

The Tringhams anticipate that, like most of their peers, they'll be paying for student loans and supported living for both their kids. Anthony reckons their cohort, unlike folks a decade or two older, will have mortgages that are "unpayoffable", leaving their kids to pay it off or sell up.

For both couples, eating out and going to gigs is something they've never let lapse, unlike their parents who went out only for very special occasions, barely listened to music (and then only the tunes of their youth, never new stuff). They only knew of the world what the 6pm TV news and local papers told them.

"We have such a holistic interest in global events, politics, music, arts. They're intelligent but our parents just didn't have access to information," says James.

"It was just what their friends knew, only the mainstream," adds Rosetta. "There was a lot of prejudice, but we're more open minded, and positive.

*Brought to you by Pinnacle Life, who also believe 50 is the new 40 and are celebrating this with a special offer of 20 per cent off the price of your insurance policy for a limited time. You can also go in the draw to win a Richie McCaw-signed rugby jersey. Offer ends January 31.