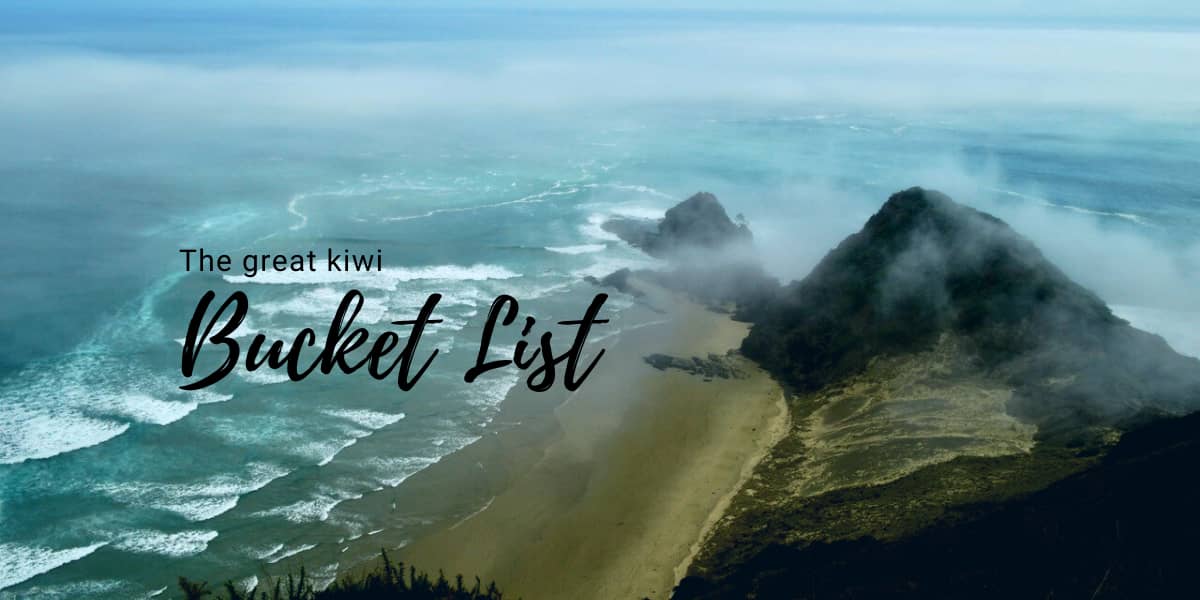 The ‘new’ great kiwi bucket list – what’s on yours?

With international travel off the cards for the foreseeable future and summer starting to kick in, there’s no better time to make the most of living in one of the most beautiful countries in the world - Aotearoa. That got us talking at Pinnacle Life about what was on our kiwi bucket list.

1.Watch the oceans clash at Cape Reinga. There are not many places in the world where the oceans meet. Watching the Pacific Ocean and the Tasman Sea come together from the cliffs above on the northernmost point is spectacular.

2.Board the sand dunes at Te Paki. After you’ve watched the oceans clash drive south for a bit and find the Te Paki dunes. Incredibly massive, the ride down is exhilarating and well worth the uphill slog.

3.While you’re up this way, visit Waitangi and learn more about the history of our country.

4.Put your mask and snorkel on and swim with the fish at Goat Island. Okakari Point Marine Reserve was one of NZ” first marine reserves. You swim straight off the beach out to the island. Keep a look out for giant snapper.

5.Surf at one of our world-famous beaches – Whangamata Bar, Shipwreck Bay in Northland, Manu Bay near Raglan or Matakana Island near Mount Maunganui have all been recognised by surfing legends as having some of the best surf in the world.

6.Sit in the pools at Hot Water Beach. Most kiwis have heard of Hot Water Beach and Cathedral Cove which explains the hundreds of people who descend in summer. A local top tip is to do this one in winter or at sunrise when there are fewer people around. The water is hot, so you don’t need to worry about getting too chilly at any time of the year!

7.It’s almost impossible to go anywhere in NZ and not come across a sheep or a cow. If you’re a ‘townie’ give shearing or milking a cow a go at the Agrodome in Rotorua, Sheepworld in Warkworth, The Point in Kaikoura and The Glenorchy Animal Experience.

8.Ride the Rere rockslide in Gisborne. Carved over thousands of years a natural waterpark has formed complete with waterslide. Once known only to the local Maori tribes today it’s no secret.

9.Spend the day catching fish then cook it over a fire on the beach[1] – there are few places in the world that we think you can do this one so make the most of living in Aotearoa. Bonus points if you play the guitar and can bring that along too.

10.Sleep under the stars in Tekapo. While freedom camping has come under fire in recent years as travellers abused the privilege, it is still possible in some spots. A great place to ditch the tent and sleep out is Tekapo which has some of the clearest and darkest night skies of anywhere in the world.

11.Ski the peaks in the South Island. If you’re a seasoned skier, you’ve likely done all the peaks near Queenstown already. But for those of us not so experienced the South Island ski fields are still worth a visit. Ride the chair lifts to the top of the mountains for incredible views, have fun on the learner slopes and then congratulate yourself with a hot toddy.

12.Do one (or all!) of our Great Walks – Milford, Routeburn, Kepler, Heaphy, Abel Tasman, Raikura, Tongariro, Waikaremoana, or Whanganui. Even if you’re not a hiker on most of these hikes you can walk into a hut and walk out in a day or do a guided tour where they carry your bags—one of the best ways to enjoy Aotearoa’s natural beauty and kiwi company.

Whether you only tackle one this summer or you aim for all 12, we’ll be out there with you having adventures.

At Pinnacle Life we love bucket lists. Our terminal illness benefit is not just about paying for treatment but is also there for people to achieve their dreams when their life is cut shorter than they planned. We figure it’s a good time to review what’s on your list and make it more ‘kiwi’. Don’t wait to run out of time!

[1] Note that in most places only small fires are permitted on beaches and reserves and the fire must be contained in a barbecue or incinerator, or below the high water mark. Of course, please don’t do this on a dry hot and windy day! checkitsalright.nz.)

If you’re diagnosed with a terminal illness and expect to live less than 6 -12 months (depending on your policy) you can have your lump-sum amount paid early.