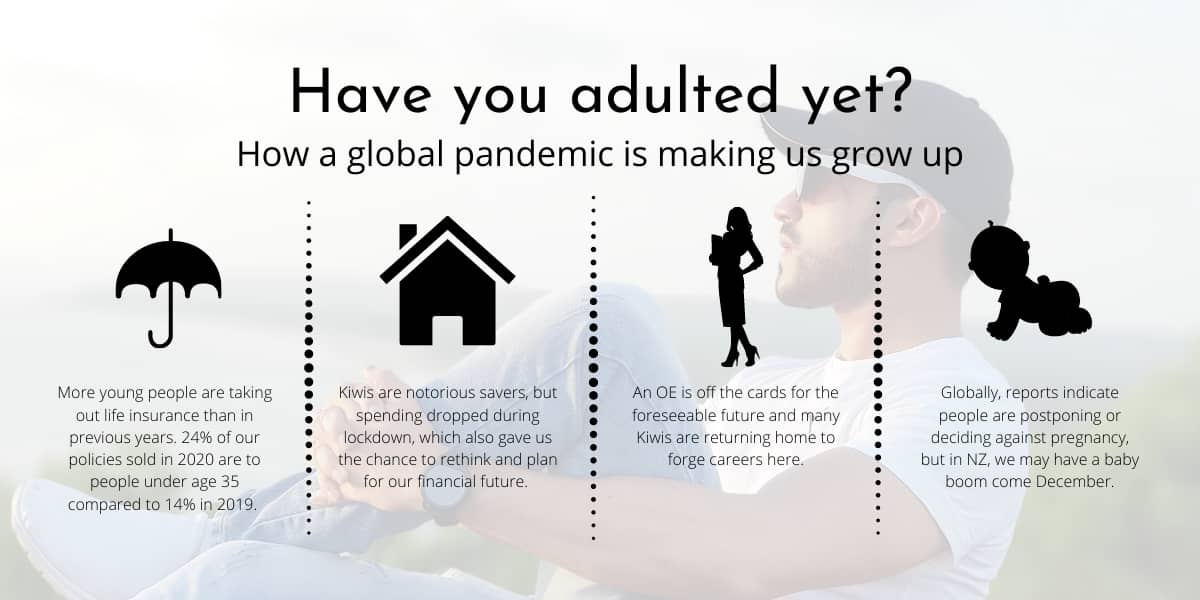 Have you ‘adulted’ this year? How a global pandemic is making us grow up

Don’t mistake adulting for adultery. We’re not getting that personal. But we have been thinking about how the Covid-19 pandemic has changed our behaviour and our plans for the future. ‘She’ll be right mate’ won’t stand up against a global pandemic. We’ve had to stop behaving like teenagers and only using half of our brains, and become a bit more ‘grown-up’. We’re considering risks and taking steps to mitigate them and making responsible decisions.

One thing we have noticed amongst our customers is a shift in the average age for new policies. More young people are taking out life insurance than in previous years. The advent of Covid-19, we think, has meant that younger people have realised that they are at risk of dying or getting very sick. Key triggers for ‘getting around’ to taking out life insurance are usually major life events like buying a house or having a baby. Until that point, most people don’t have a strong drive to need life insurance. Even then it’s more usual for people to take out life insurance in their 30’s and 40’s than in their 20’s.

Planning for a financial future

This shift in average age for life insurance could also be related to younger people realising they need to have a financial plan. Kiwis, in general, are notorious for not saving and being under-insured. Research by the FSC (Financial Services Council) conducted during Alert level 2 in April, found that 70% of us would not be able to meet basic financial commitments such as mortgage/rent and bills beyond a short period if we lost our jobs. Over a third of us would not be able to last beyond a month.

As the pandemic took off, and we hibernated at home, spending dropped. Many of us faced a pay cut or worse no job, so we had to think about making our money last. It gave people the chance to rethink their finances and consider what was important. Maybe saving for the future was more important than buying a coffee every day or that extra beer at the pub.

The end of the Kiwi OE

The great Kiwi OE is now off the cards for many. With nowhere safe to travel for the foreseeable future, kiwis are having to abandon their OE plans. For generations, taking a working holiday in the UK or elsewhere has been a coming of age for kiwis. Now with nowhere to go, many kiwis are not leaving, and many more are returning home. Some will put it off until travel is possible again, but many will also turn to forge their career here, and saving for a house instead of saving to travel.

A baby boom or baby bust?

With 6 weeks of lockdown at home and couples spending more time together, many people predicted a baby boom for later this year. While anecdotally women report difficulty in finding a midwife for December or January, The New Zealand College of Midwives Maria Scott said they had not been receiving reports from midwives indicating they were more heavily booked than usual. Globally, reports indicate the threat of an economic crisis combined with the potential for lack of healthcare availability means people are postponing or abandoning plans for children. Responsible decision making indeed. In NZ it will become apparent in December and January.

We are certainly not proposing that Kiwis have lost their sense of fun or spontaneity, but it does look like Covid-19 has made us consider our preparedness for the future. Protecting what makes us feel lucky has never felt more relevant or important.