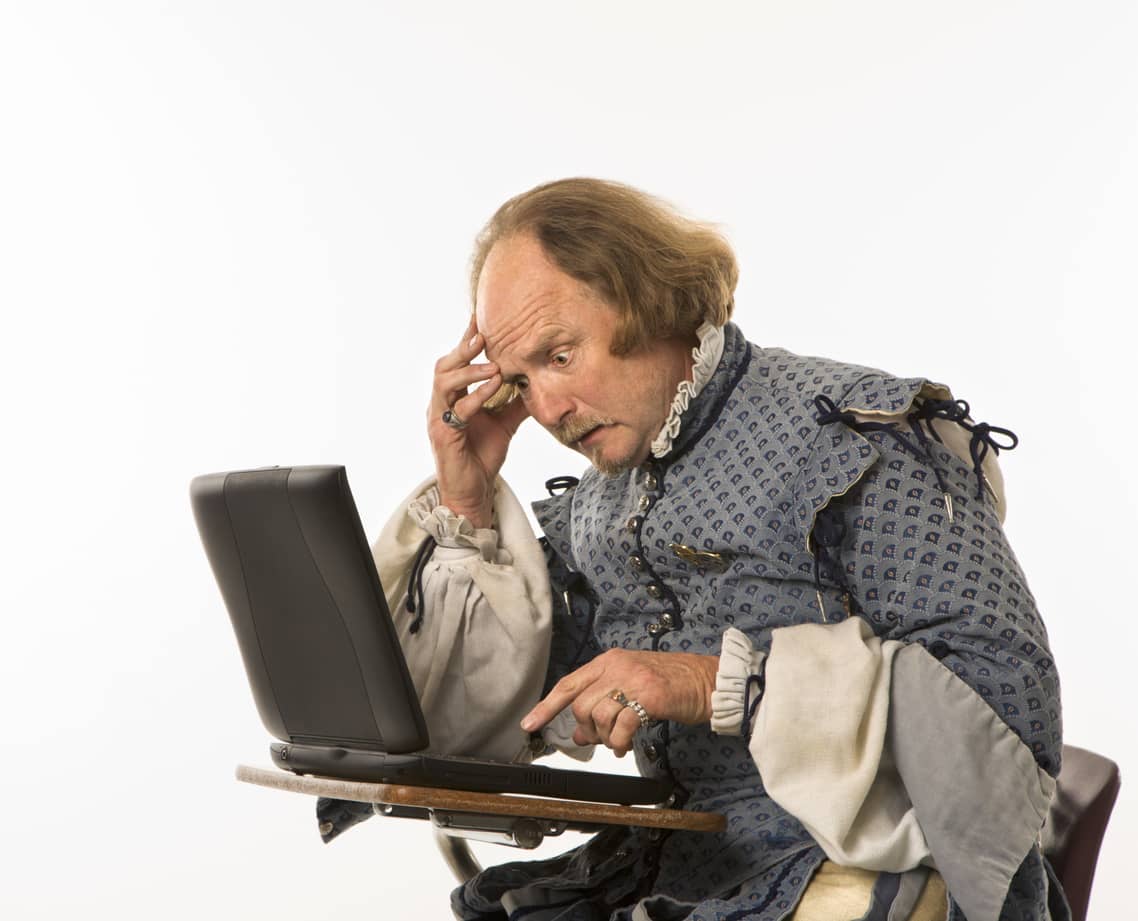 Hands up if you studied Shakespeare at school. And then leave it up if you completely 'got it' on your first read-through. Not many of you, huh.

Part of the reason we find it hard to read now is that the written form of English was still being developed when Shakespeare's work was published. That meant the written word at that time was a direct reflection of what people spoke, including dialects. There wasn't standard spelling, formal or informal writing or even standard punctuation. In the 400 years since then, we have standardised spelling so that we can all understand what we read, in theory anyway.

For us to read Shakespeare now, it becomes remarkably more straightforward if you adopt an accent that is a mix of Irish, Yorkshire and West Country and bear these few tips in mind.

At which hour faceth a page we initially regard t'with suspicion and dread. Tis only once we've studied't and discussed't and becometh familiar with't doth the meaning becometh clear, or not if 't be true you've hath lost faith during the process.

Or…when faced with a page of Shakespeare, we initially regard it with suspicion and dread. Only once we've studied it, discussed it and become familiar with it does the meaning become clear. Or not, if you've lost interest during the process).

Although our written word has become standardised, some of our writing, particularly business documents, have become bogged down in formality. They could be Shakespeare for the amount we understand easily. They don't reflect our conversation. When we face an email or document with big words and extra syllables, the text becomes hard to read, loses meaning, and quickly loses us. We need an expert to guide us, just like tips to understand Shakespeare.

The layout makes a difference to how easily something is to understand too. Consider older recipes. For some reason, they wrote paragraphs. These days a recipe is far more likely to have a heading, a description and numbered steps or even be an infographic. The information is instantly understandable. No funny accents, dictionaries or Shakespearean translators are required.

It's a slow road, but businesses are starting to realise that having long, complicated documents with lots of legalese does not make their product better. In fact, it has the opposite effect. We are all far more likely to use and buy something we know we understand than when we don't.

We are all far more likely to read a comic than a Shakespearean play on a lazy Sunday afternoon.

We are all far more likely to make a burger patty with good pictures and easy instructions than from a block of text.

We are all far more likely to take out an insurance policy when we understand what we're covered for than when we don't.